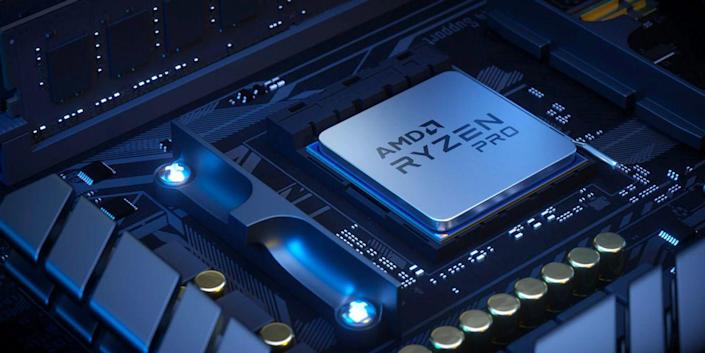 Advanced Micro Devices (AMD:NASDAQ) reported first-quarter earnings after the bell on Tuesday, beating analyst estimates for earnings and revenue. This sent the stock up as high as 8% in extended trading on Tuesday as executives shrugged off concerns about PC slowdown.

Revenue for the quarter was up 71% year-over-year, as the chipmaker’s sales crossed the $5bn mark for the first time ever. AMD reported $5.89 billion in revenue, beating Wall Street’s estimate of $5.52 billion. Earnings also rose up 117% year-over-year to $1.13, adjusted, versus $0.91 expected. AMD said it expected $6.5 billion in sales in the current quarter, ahead of analyst expectations of $6.38 billion.

One highlight in AMD’s stellar quarter is its high-end server chip business, which primarily competes with Intel (INTC:NASDAQ). Some data points show that AMD has taken market share from its rival while it tries to get its manufacturing prowess back.

AMD CEO Lisa Su said, adding that AMD believes that it has gained market share in PC chips for eight straight quarter, though the company expects the total PC market to fall by a high single digit this year.

“Although the PC market is experiencing some softness coming off multiple quarters of near-record unit shipments, our focus remains on the premium, gaming and commercial portions of the market where we see strong growth opportunities and expect to continue gaining overall client revenue share,”

PC sales are reported in AMD’s computing and graphics segment, which rose 33% on an annual basis and was 8% higher than the December quarter. AMD said that the increase was driven both by central processors and graphic processor sales, and that the average sales price for Ryzen processors rose during the quarter.

Some analysts suggest that PC sales could shrink this year after two years where shipments exploded as people needed laptops to work from home or go to school remotely. Some investors believe that the pandemic PC boom is over, but AMD, which supplies the processor at the heart of many laptops and desktops, isn’t feeling the decline.

Cloud server sales for the quarter increased 88% to $2.5 billion. AMD said the rise was driven by higher server processor sales as well as semi-custom sales, which are the chips that go into the heart of game consoles like the PlayStation 5

Su said that AMD’s semi-custom business grew by “double-digits” on a year-over-year basis due to consumer demand for the Playstation 5, Xbox One, and Valve’s Steam Deck. “Sales for this game console generation continue to outpace all prior generations, and we expect 2022 to be a record year for our semi-custom business.”

AMD had a blowout 2021 when its sales increased 68% and gross margin grew to 48%. However, the stock has had a rough 2022, dropping over 39% so far due to the sell-off in the tech sector, after as investors weigh the implications of the Fed rate hike.

Investors are also shying away from semiconductor stocks in the face of increased inflation risk. This is already rearing its head in the balance sheet of competitors. For example, Intel gave a disappointing forecast for the June quarter, citing weak PC demand and macroeconomic challenges during its earnings release.

AMD said it completed the acquisition of Xilinx in February. The deal was originally announced in 2020 with a $35 billion price tag. AMD said that its results included six weeks of revenue from the deal, and that without Xilinx sales, revenue would have only increased 55% year-over-year to $5.3 billion.

AMD said it repurchased $1.9 billion of its stock during the quarter. The chipmaker also on Tuesday forecast stronger- than-expected full year and second-quarter revenue as the boom inndata centers continues to boost demand for its chips.