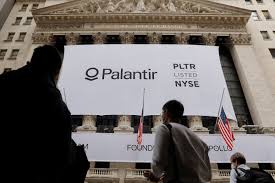 Shares of Palantir Technologies (PLTR: NYSE) plunged 15.8% on Thursday after the data-analytics company posted a larger-than-expected net loss in the fourth quarter. Palantir’s revenue jumped 34% year over year to $433 million, driven by new customer additions and higher sales to existing clients. Its rapidly expanding commercial division saw sales surge 47%, including a 132% increase in the U.S. The segment accounted for roughly 42% of Palantir’s total revenue in 2021.

For the first quarter of 2022, management expects revenue to grow roughly 30% year over year to $443 million. The company also reiterated its long-term goal of annual revenue growth of at least 30% through 2025.

While that level of sales growth would be impressive, investors are increasingly demanding profitable expansion from premium-priced companies. In the current market environment, inflation and other macroeconomic concerns are leading investors to be more risk-averse. That, in turn, has led to steep declines in the share prices of growth stocks that have failed to deliver on the bottom line.

On the company’s earnings call, CEO Alex Karp pointed to the $2.3 billion in cash and cash equivalents that Palantir has on its balance sheet plus no debt as an example of how it is, “built for bad times.” Not only does it have plenty of cash on its books, but the company also generated $333.9 million in cash from its day-to-day operating activities over the past 12 months.

However, despite the strong cash business that Palantir is, its stock has been struggling badly and enduring bad times of its own, not just on earnings day. The bearishness in disruptive growth stocks like Palantir hasn’t been anything new of late and an earnings miss just adds fuel to the fire. Over the course of the past six months, the stock has lost 75% of its value. Palantir is currently trading below its IPO price and just above its 52-week low.

The recent increase in Treasury yields buoyed by the hawkishness of the Federal Reserve has put more bearish weight on the stock. Given the risk-off mood in the market, the freefall on the stock is far from over. Analysts forecast that the stock may get to the $10 psychological price level before bottoming out.

The company’s relationship with the government in areas of surveillance and military activities has also contributed to a dim outlook on the stock, especially as the company has remained secretive about its customers (which includes the CIA) and the core of its activities. This could explain why despite the apparent strong fundamentals – increased revenue and government contracts – the stock is still on a downward trajectory.

Experts have raised concerns over Palantir’s reliance on large deals with a few customers and its dependence on government contracts, which make its revenue flow uncertain. “You are starting to see that the U.S. commercial business is starting to dominate,” Chief Operating Officer Shyam Sankar told Reuters in an interview.

The company’s management has indicated an interest in rejuvenating its slowing commercial growth by expanding into Europe. It has added hundreds of salespeople, simplified its software products, and even spun up a program to take equity stakes in small startups that agree to be customers.

Generating revenue without income remains a sour point for investors. Chief Executive Officer Alex Karp assured analysts during the company’s conference call, that net income is “within eyesight,” but he didn’t provide a date. However, given the sentiment in the market which is punishing high growth stocks that are not backed by profits, investors would like to see the money before they more bets on the company