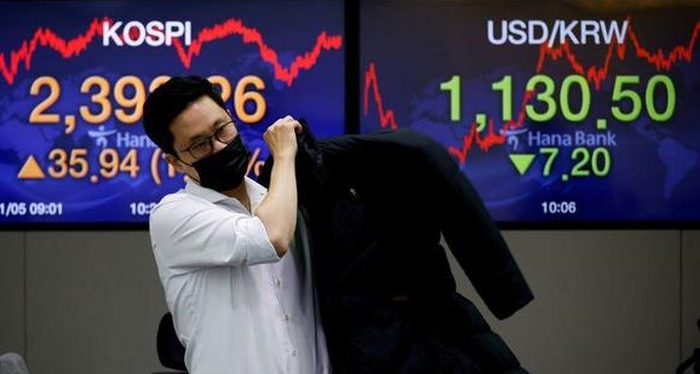 There was a slight increase in Asian stocks on Wednesday.

The gains can be attributed to the optimistic attitude that investors have towards the efforts of finding a vaccine, effective against the deadly Coronavirus.

The majority of investors also anticipated a limited supply of oil, which caused oil prices to soar to a record-high.

According to the MSCI Index, which keeps track of the global equity market performance, the Asian-Pacific stocks outside of Japan registered a 0.61% increase. Meanwhile, Nikkei 225, Japan’s stock average index, climbed 1.12%.

Chinese shares also increased by a margin of 0.07% while Korea Composite Stock Price Index (KOPSI) increased by 1.05%. Australian stocks also bounced back from a loss, to kick off the trading session with a 0.18% gain.

Treasuries kept pace with the most recent trend, causing the 10-year yields to decrease further from the highest they have been in the past year. This resulted in a flattening of the yield curve.

European stocks displayed a mixed performance. While the Euro Stoxx 50 futures suffered a 0.03% decrease, both German DAX and Britain’s FTSE futures gained by 0.03% and 0.18% respectively.

Investors are hopeful that once president-elect Biden takes office, the distribution of coronavirus vaccines will be scaled up.

They’re also hopeful that the new administration will be more liberal when it comes to spending on stimulus packages. This would translate to a faster recovery of the economy, and a surge in demand for commodities.

According to Hugh Young, who serves as the Managing Director at Aberdeen Asset Mgmt Asia Ltd., the interest that investors displayed in the second half of 2020, will likely carry on in 2021.

When addressing a panel at the Reuters Next conference, Young said, “the eternal question is overvaluation. Asian markets have done extremely well, which is sort of frustrating, but certainly the quality is there in Asia, the momentum is in Asia so it looks to be a stable year and a positive year for Asia.”

U.S. West Texas Intermediate (WTI), a sweet crude oil from mainland Texas, recorded a considerable gain of 1.13%, to end with a price tag of $53.81 per barrel.

This is the highest price it’s reached since February, following the unforeseen decline that was experienced in U.S. crude inventories.

Brent crude, which is extracted mainly from the North Sea, also recorded an increase of 1.27% to sell at $57.30.

One aspect that has enabled oil prices to increase entails Saudi’s decision to reduce its output. The country intends to decrease production by an additional 1 million barrels every day, in February through March.

Investors have also been keeping tabs on what’s going on in the US Capitol after three Republicans declared that they would join the Democrats in the voting decision intended to impeach President Donald Trump.

If the impeachment goes through, it’s likely to have an effect on the stock markets.

However, Peter Essele, head of portfolio management at Commonwealth Financial Network in Boston, holds a different opinion. He believes that the markets will continue showing a strong market as they have been since the presidential elections.

Yields from the decade-long federal government debt plummeted by 1.124% on Wednesday. The decline- from 1.187%- was a little surprising considering how steady they have been in the past one year.

The yield curve, which had risen to its highest level since May 2017, fell slightly to 97.5 basis points.

Due to this, the US dollar also declined, though by a small margin. Compared to yen currency, the dollar dropped by 0.12% to 103.65.