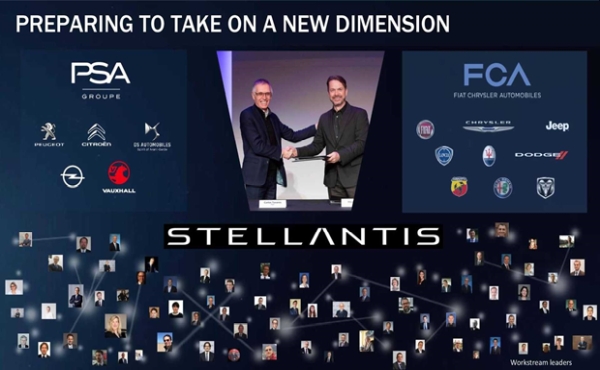 The merger between Groupe PSA, the French-based car manufacturer and Fiat Chrysler Automobiles (FCA) Group, is expected to be finalized on January 16, 2020. Once the deal is settled, the newly formed venture will be called Stellantis.

Stockholders of both firms came to a consensus about the matter on Monday. Fiat Chrysler is the brains behind a number of high-end car models, such as Chrysler, Fiat, Maserati, Dodge, Jeep, Alpha Romeo, Ram, and Lancia.

According to Jeff Schuster, who works as an analyst with LMC Automotive, the resulting company, Stellantis, will rank as the fourth biggest automaker worldwide. Currently, the value of the two companies is about $57 billion.

PSA and FCA have both had a rather shaky run in the industry. In 2019, they managed to sell a total of only 8 million cars, combined. By comparison, Volkswagen Group sold a whopping 11  million cars.

The merger will give Stellantis access to a wider market. In Europe, PSA and Fiat Chrysler are fierce competitors. But in the US, where Fiat Chrysler is ranked the fourth biggest car manufacturer in sales, PSA has zero presence.

One challenge that Stellantis will encounter is that it’s entering the Western Europe market, which already has such a stiff competition. What makes the competition intense is the fact that there are so many car brands. Thus, the merger might create a scenario where Stellantis ends up competing against its own brands.

But, according to Bill Visnic, the editorial director for the Society of Automotive Engineers, things will change overtime. He said, “in 10 years or five years from now, even, I think it’s highly unlikely that all these brands will remain.”

Stellantis, for instance, won’t have a valid reason to continue running individual brands like Alfa Romeo. This particular car not only has a low demand, but it also lacks a clear brand image, which makes it all the more unpopular among customers.

Visnic also believes that continuing the production of Fiat, Opel, Citroën and Peugeot won’t make any sense given that they all address the same need- that of providing basic transportation means.

But this will only be an issue in the European market and not the US. In the latter, PSA does not have any of its cars on the market.

If anything, Fiat Chrysler seems to be lagging behind in this region because it offers just a small selection of cars. Chrysler, for instance, only offers three models: the Chrysler 300, which is a rear-wheel-drive luxury car; the Chrysler Pacifica and Voyager, both of which are classified as minivans.

According to George Karolis, president of the Presidio Group, FCA offers a limited variety of cars because it’s easier to manage. Presidio Group is an investment bank, which works mainly with car dealers.

A considerable portion of FCA’s dealers based in the US sell most, if not all, of the firm’s car brands. Therefore, it makes sense that Chrysler’s largest supply is for minivans. If a client is interested in buying an SUV, they can still get one by choosing between a Jeep or a Dodge.

Jeep is an iconic brand in the automotive space, a factor that will work in Stellantis’ favor. As Karolis put it, “Jeep is a very strong core brand and a very popular product for sure.”

Schuster notes that one thing the two companies have in common is the struggle they have experienced in the Chinese market. The merger will not be able to tackle this issue immediately, he said.

The formation of the new venture means more resources will be available as Stellantis steps into the self-driving-car space.

This is one sector where the two automakers can be beneficial to each other. Schuster points out that PSA has a little bit of experience in the EV space, which it will bring to the table.

The merger will be finalized once the two companies receive approval from several regulatory bodies, which include the European Union and European Central Bank.