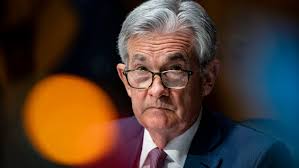 Large-cap tech stocks helped support the broader market, with Amazon (AMZN:NASDAQ) rising 2.4% and shares of Apple (APPL:NASDAQ) and Nvidia (NVDA:NASDAQ) gaining roughly 1.7% and 1.5%, respectively. Other notable gainers included Illumina (ILMN:NASDAQ), which rose 17% after the genomic sequencing company issued a 2022 revenue outlook that was ahead of consensus.

Federal Reserve Chairman Jerome Powell, with a seemingly clear path to a second term heading the central bank, declared Tuesday that the U.S. economy is both healthy enough and in need of tighter monetary policy.

As part of his confirmation hearing before the U.S. Senate Committee on Banking, Housing and Urban Affairs, Powell said he expects a series of interest rate hikes this year, along with other reductions in the extraordinary help the Fed has been providing during the pandemic era.

Powell said the moves are in response to an economy that has both a strong jobs picture, with an unemployment rate at 3.9% in December. “If inflation does become persistent, if these high levels of inflation get entrenched in our economy and people’s thinking, then inevitably that will lead to much higher monetary policy from this,” Powell said.

Tech stocks have been volatile to start the year, as rising interest rates have put pressure on equities. However, interest rates cooled on Tuesday, with the 10-year Treasury yield slipping below 1.75%.Bond yields had been on a wild run since the start of the year, topping at 1.8% earlier in the week.

Tuesday’s market moves follow a sharp rally on Monday afternoon, which saw the Nasdaq erase a 2.7% loss to finish slightly higher and snap a four-day losing streak. The Nasdaq is now down about 3.1% since the start of 2022 and more than 5% from its record closing high in November.

The sell-off in tech stocks made some of their stocks look attractive to investors hoping to cash in on ‘cheap prices.’ For example Peloton, a stock which has fallen by as much as 80% from it’s highs, finished over 6% higher. ARK Innovation ETF a stick which has careened by 45% from its all time high in February rallied by 2.4%

However, despite finishing in the green for the last two days, there is still a lot of frothiness in the market regarding tech stocks. The long term consensus still remains rotation into value and economic sensitive stocks.

If anything, the rally is just a reprieve from the sell-off since the beginning of the year.

Calling a bottom for tech stocks remains premature at this point. The fundamental thesis for risk-off trades in the market still remains intact.

Looking ahead, investors will get an updated look at the state of the economy later in the week, with inflation data due out on Wednesday. Economists surveyed by Dow Jones expect CPI to have risen 7% from a year ago, the most since the summer of 1982, and 0.4% from November. Excluding food and energy, core CPI is projected to have increased 5.4% and 0.5% respectively. However, there is growing chatter among some economists that inflation could be showing signs of peaking. So the report will be looked at closely for the longer-term trend.