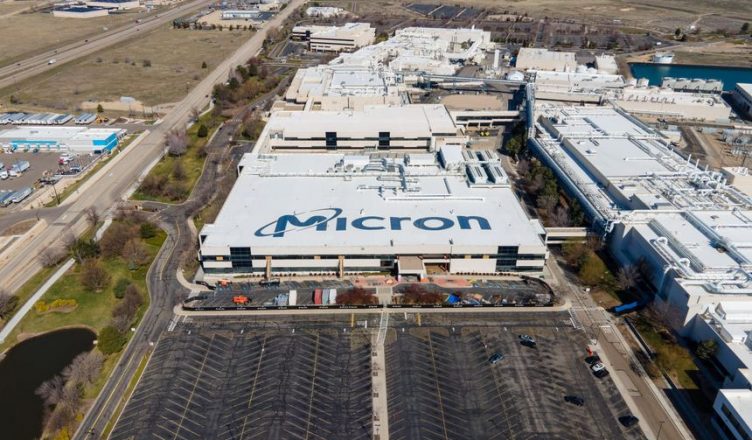 Shares of Micron Technology (MU:NASDAQ) closed 1.32% lower during Thursday’s trading session, and fell 6.3% in extended trading but later pared some losses. A significantly weaker than expected business outlook by the Boise, Idaho-based memory-chip firm on Thursday following nearly two years of strong demand raised concerns that the industry was turning toward a down cycle.

Sales for the last quarter rose 16% annually to $8.64 billion, while profit grew 51% to $2.63 billion. The company’s earnings per share of $2.59 beat analyst expectations. However, the sour point in the earnings report came from its reduced revenue guidance for the current quarter to $7.2 billion versus consensus expectations of $9 billion. Micron expects adjusted profit for the quarter of $1.63 per share, plus or minus 20 cents, compared with estimates of $2.57 per share.

While Micron executives were confident about demand for their chips in the long term, they were hunkering down for a tough road ahead by cutting the number of chips they make to ensure chip prices. While Micron did not provide any numbers, it said it will reduce spending on manufacturing of chips in fiscal year 2023 which starts in September.

“I think the extent of the shift has definitely been bigger than anyone was anticipating in the ecosystem,” Micron’s chief business officer, Sumit Sadana, told analysts during the company’s earnings call “These changes are rippling through the ecosystem now.” The company’s executive also stated that China’s lockdown is causing a 30% drop in Micron’s China revenue for the current quarter, and a drop of 10% in total revenue.

Micron which is a major vendor of memory chips for PCs and smartphones to companies like Apple (APPL:NASDAQ), Motorola (MSI:NYSE), and Asus said on Thursday that it expects smartphone sales to be meaningfully lower than previously expected for the rest of 2022, citing a reduction in consumer demand.

Micron’s warning is the latest sign that the market for new computers and phones is starting to slump after two years where the pandemic supercharged growth as people worked and went to school from home.

The outlook for memory chip makers has worsened in recent months as surging inflation, China’s cooling economy, and the Russia-Ukraine war-hit consumer spending on smartphones and personal computers, a crucial market for the industry. Sadana said the demand for that segment was worse than expected. This has driven down chip prices and led to a build-up of inventories, with analysts estimating a drop of 3% to 8% in the prices of DRAM chips during the third quarter of 2022.

Sadana said Micron will hold a portion of chips it has already produced in the warehouse rather than releasing them to the market, and supplement any supply shortage that could occur as it cuts back chip production. “We don’t mind holding this inventory and it’ll enable us to just drive better pricing discipline in the market,” Sadana told analysts.

The forecast from the chipmaker is in line with some third-party industry estimates. Earlier this week, Gartner predicted that global mobile phone sales would fall 71% in 2022, revising its earlier estimate of 2.2% growth. Chip shortages have hit the automotive, medical devices, and other electronics-dependent industries hard. The chokepoints have largely been older-style chips, though, not memory.

The company is seeing some signs of strength, though. Mr. Mehrotra said sales of chips to big data centers increased more than 50% in the third fiscal quarter, and revenue from the automotive sector set a record amid a shift toward electric vehicles that need more computing power than their gas-powered counterparts.