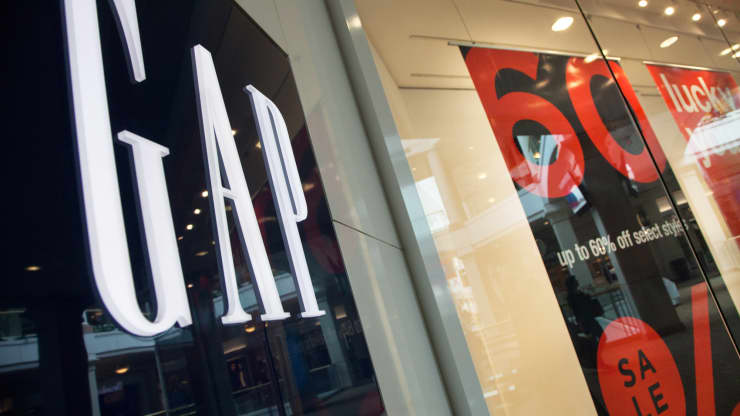 Mixed sentiments trailed retail stocks that released earnings at the close of market. Gap Inc. (GPS:NYSE) stock climbed 8.2% in premarket trading Friday after projecting sales to grow in the current year as the retailer adapts to new clothing trends among people returning to work.

Sales in the fourth quarter rose 2% to $4.53 billion as people looked to redo their wardrobe to go back to regular lives after two years of the pandemic. Adjusted loss in the first quarter was 2 cents, narrower than estimates from Wall Street. The company behind Old Navy and Athleta brands said revenue will grow in the low-single-digit range after it overcame supply challenges to beat estimates for 2021.

At the company’s earnings call, CEO Sonia Syngal opined that customers were leaning into categories like dresses or new silhouettes and pants for back-to-work, as well as denim with new leg shapes. From Gap’s perspective, this shift in demand is a pretty radical change from last year.

Faced with the prospect of empty shelves due to supply chain snarls, Gap airlifted its stocks to meet holiday demand. The company continues to place orders earlier than usual to offset longer delivery times.

Barring Old Navy, whose fourth quarter revenue fell 3%, all other brands grew, the company’s namesake brand rose the least with 7% growth. The relaunch of Banana Republic under a new premium positioning yielded results with the brand growing the most at 22%. The company said the brand is attracting more high-income shoppers. Athleta revenue grew by 18%.

Costco (COST:NASDAQ) on the other hand, retreated 2% in after hours trading after a better-than-expected quarterly report. The stock finished 0.96% higher on Thursday as investors waited for the company to release its earnings.

The beat on Wall Street estimates came as consumers returned to its stores and splurged on high-margin items such as jewelry and home furnishing goods. Sales at Costco, which relies heavily on customers seeking a treasure-hunt shopping experience at its cavernous warehouses, have benefited following the rollout of vaccines and easing of COVID-19 curbs.

Albeit, Costco is still pressured by container delays, higher labor and freight costs and chip shortages, which are impacting deliveries. “Despite all the supply chain issues, we’re staying in stock and continue to work to mitigate cost and price increases as best we can,” Chief Financial Officer Richard Galanti said.

Best Buy (BBY:NYSE) also released its quarterly earnings on Thursday. The company’s shares arose 9% on Thursday the consumer electronics leader said it would increase its capital returns to shareholders. However the stock dipped almost 2% in after-market hours after analysts at Raymond James downgraded the stock from outperform to perform

Best Buy’s revenue declined by 3.3% year over year to $16.4 billion in its fiscal 2022 fourth quarter, which ended on Jan. 29. CEO Corie Barry said Best Buy’s sales were dented by inventory shortages that prevented it from stocking some high-demand items during the holiday shopping season

Moreover, Best Buy’s growth investments weighed on its profitability. Its adjusted operating margin dropped to 5.1% from 6.9% in the prior-year period. The company’s adjusted earnings per share, in turn, fell 21.6% to $2.73.

Retail stocks have been buoyed by the lifting of restrictions as normalcy returns More states are lifting mask mandates, thereby leading to an increase in outdoor shopping. Consumers have also retained pandemic-induced habits of cooking and eating more at home, bolstering sales at retailers such as Costco.There have also been strong demand for high-margin items in recent months as social events and travel have resumed.

However with commodity prices rising due to supply chain bottlenecks and the war in Ukraine, coupled with inflation which is biting harder, analysts wonder how long the tailwind in retail companies would persist before consumers start pinching pennies.