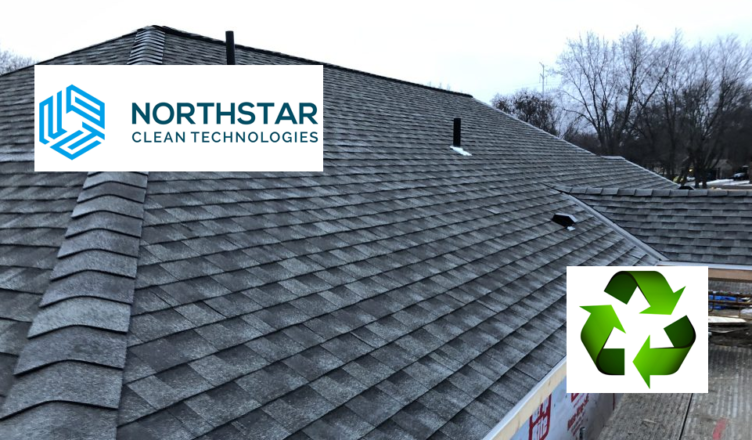 In an era when technology companies often go public while they still in the conceptual stage, Northstar has a fully constructed facility in Delta, BC in the commercialization phase with steady-state production expected in Q4 2021.

The market size for asphalt shingles in the U.S. is CAD $2.2 billion.

The “tipping fees” (surcharges paid to dump the old shingles) have been steadily increasing as governments around the world advocate for a more “circular economy” while racing to reduce landfill waste.

“The circular economy provides a tangible framework for reducing our impacts, protecting ecosystems and living within the means of one planet,” states the 2020 Circularity Gap Report.

A telephone survey of 13 Vancouver, BC-based roofing companies confirmed that environmental concerns have spread to the frontlines of asphalt roofing industry.

“Every single shingle that gets torn off here in Vancouver goes straight to the landfill,” confirmed Will Franklin, owner of Canuck Roofing, “That’s definitely a huge waste and the wrong thing to do.”

Franklin reports that the tipping fees have tripled in the last ten years.

“Accessibility is going to be a big thing,” adds Franklin, “The ideal scenario would be a recycling company that picks up the shingles themselves, at a lower rate.”

“Our clean technology solution is expected to have a significant environmental impact by reducing landfill usage, reducing the CO2 impact of asphalt, fiber and aggregate sand production, and contributing to the circular economy,” confirms Mills.

As landfills reach capacity, federal governments around the world are pushing diversion programs to the forefront.

“I’ve proposed a huge investment in American infrastructure and American innovation to tap the economic opportunity that climate change presents our workers and our communities,” stated President Joe Biden at an April, 2021 Climate Summit.

After becoming President, Biden immediately brought the U.S. back into the Paris Climate Agreement.”

These sweeping political and technological changes create a tailwind for circular economy companies, but to maximize the financial benefits Northstar will need local and federal advocates.

On July 27, 2021 Northstar announced that it has engaged Wellington Dupont Public Affairs to lead government engagement on the reduction of single-use asphalt shingle disposal into landfills across Canada.

With offices in Ottawa, Toronto, Montreal and Washington, DC, Wellington has influence across Canada and the United States.

Mr. Brian Storseth, Principal of Wellington and former 10-year Canadian Member of Parliament will be leading the initiatives for Northstar.

“Wellington will have an essential role to play, as we seek support from the federal, provincial, and municipal governments, in the execution of our national rollout strategy,” stated Mills.

On August 17, 2021, Northstar announced that it is short-listing engineering firms to undertake a detailed engineering study for the Company’s first planned expansion facility in Canada.

ROOF will use the detailed engineering study to help design a simplified, turn-key operational facility that has the potential to be quickly placed into production in municipalities across Canada and the United States. Northstar anticipates the engineering contract to be awarded in the fall of 2021.

“We are proceeding well on the path to steady state production at our first facility,” explained Mills, “We see the potential to increase the capacity, efficiency and reliability of our proprietary process design technology.”

“The shift to a global economy based on reusing, repairing, and recycling—instead of making things, using them, and then throwing them away—is gaining traction as a sustainable investing theme,” reports Barrons.com.

“By 2030, the circular economy could yield up to US $4.5 trillion in economic benefits globally,” states Jessica Matthews, head of sustainable investing at $12.5 billion J.P. Morgan Private Bank.

“Northstar’s objectives align perfectly with the current ESG environment,” confirmed Mills on a September 2, 2021 webinar call, “But we are not a future looking ESG tech company that’s going to come on line in 2025 or 2030. Our technology is ready now.”