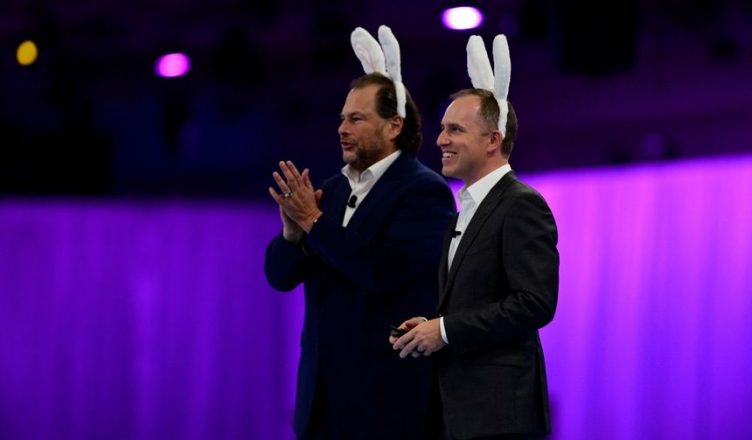 Salesforce (CRM:NYSE) shares closed down 8% Thursday as analysts and investors digested Wednesday evening’s earnings report and the surprise news that co-CEO Bret Taylor will depart by the end of January 2023. Taylor’s departure will leave founder Marc Benioff as the sole CEO at the tech giant.

Salesforce beat analyst estimates for third-quarter profit and revenue but said it expected between $7.9 billion to $8.03 billion in revenue in the company’s fourth fiscal quarter, lower at the midpoint than analyst expectations of $8.02 billion in sales.

Revenue for the fiscal third-quarter ended October grew 14% year over year and the midpoint of the company’s projection for the current quarter represents growth of only 9% year over year—a record low and a humbling number for a company that has long prided itself on 20%-plus growth rates.

It doesn’t look temporary. Billings, a measure of new business transacted during the quarter, grew only 5% year over year—a record low. Salesforce also broke with established practice in its past third-quarter reports by declining to give a forecast for the next fiscal year.

In the company’s conference call, Chief Financial Officer Amy Weaver cited the “very unpredictable macro environment” as the main reason for the move, though peers like Workday and Snowflake managed to issue projections for the same period in their own quarterly reports this week.

Regardless of who is in the corner office, Salesforce is facing some of its most significant challenges in years. The slumping global economy is making the big corporate customers Salesforce counts on extra cautious about their spending. That, plus the stronger dollar, is leading to some of the weakest growth rates Salesforce has ever seen.

The company said it would take a $900 million hit in sales because of foreign currency effects. And operating cash flow fell 23% year-over-year to $313 million for the quarter.

“We have to let him be free, let him go, and I understand, but I don’t like it,” the billionaire said on an earnings call. Taylor was appointed co-CEO and vice chair in November 2021, having previously served as president and chief operating officer.

Taylor was also chair of the board of Twitter before billionaire Elon Musk took the company private. Taylor joined Salesforce in 2016 when his startup, Quip, was acquired by Benioff’s company.

Shares of Salesforce are down over 42% year-to-date.

“We delivered strong top line growth with improved operating profitability and increased free cash flow, once again performing at the Rule-of-80. We are seeing customers committing to our broader platform, driven by vendor consolidation and an elevated threat environment,” said Jay Chaudhry, Chairman and CEO of Zscaler.

“Customers are engaging with us to embrace zero trust architecture, eliminate point products, simplify IT and standardize on the Zscaler platform, all of which delivers better security and lower cost.”

Shares of Zscaler are down 55% for the year.