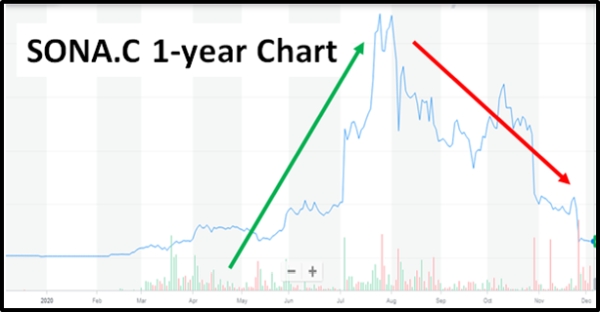 Shareholders of Sona Nanotech (SONA.C) were dealt a major blow recently, after the firm’s stock dropped by over 67%.

This was following its withdrawal of application for an interim order authorization from Health Canada.

An approval from the regulatory body would have allowed the company to start marketing its COVID-19 antigen test. In a news release, the Dartmouth-based test maker said the reason for the withdrawl was based on the feedback it received from the regulatory organization.

When assessing its request for interim order authorization, Health Canada tasked National Microbiology Laboratory (NML) with evaluating Sona’s COVID-19 test. Unfortunately, there were discrepancies in NML’s results compared to those Sona had obtained previously from MRIGlobal and SaudiVax.

Due to the contradictory results, Sona said they would go back to the drawing board and obtain more data for their clinical trials.

In particular, the company plans to incorporate a higher number of samples from COVID-19 patients within zero to six days of the condition’s symptoms manifesting. This was one of the recommendations from Health Canada.

They will then use the results they obtain from the modified trials to back their submission to the FDA. They may also use the same to resubmit the interim order authorization to Health Canada.

It’s worth noting that before Sona submitted their request to this regulatory body in August, there had never been any eligibility conditions or criteria for rapid antigen tests in Canada.

So when assessing Sona’s test, the NML employed a uniform evaluation method. This process encompasses both rapid antigen tests, which detect nucleocapsid and spike proteins, as in the case of Sona’s test.

In Sona’s view, the NML should have followed a different examination process, which would account for the unique traits of their rapid antigen test. But ultimately, the company was content with Health Canada’s decision; hence promised that it would do more research on their test.

This setback comes just five weeks after the company’s request for an Emergency Use Authorization (EUA) was denied by the FDA on the grounds of “deprioritization”. EUA mechanism is meant to speed up the provision and availability of medical products and/or services when there are public health emergencies.

At the time, the FDA said that the company’s request for an EUA was “not a priority” and therefore refused to issue authorization. Based on their assessment, Sona failed to meet the prioritization criteria for “the public health need for the product”. Following the rejection, the company’s shares fell by 48% on that day.

Sona Nanotech started the year on a high note. The company first came into the limelight in February when it announced that it would be inventing a COVID-19 test that was more efficient and faster.

Later in the year, it partnered with GE Healthcare Life Sciences, a household name in the medical research and development space. This further helped to reinforce Sona’s reputation in the market.

By July, stockholders had pushed its share price from $0.11 to a record high of $16.05 per share. With such a remarkable share-price surge, it is no wonder that it was being ranked one of the best performing COVID-19 stocks.

Unfortunately, the firm’s stock performance over the past three months shows that it’s on a downward spiral. Its latest SP decline was so sharp that it got investors questioning the company’s credibility.

The Schall Law Firm, which represents investors worldwide, has launched an investigation on Sona.

The focus of the investigation is the relaying of false and misleading statements to investors. The company is also being charged with failure to relay relevant information to investors, which would have otherwise impacted their decision-making.

It remains to be seen whether Sona’s shares will be able to recover before the year ends. Despite the volatility of its shares, the company seems hopeful that it will be able to bounce back.

Darren Rowles, the firm’s President and Chief Scientific Officer said, “We have confidence in our rapid COVID-19 antigen test and its ability to detect the virus, especially within the first week of symptom onset.” But whether its shares can recover before the year ends is yet to be seen.