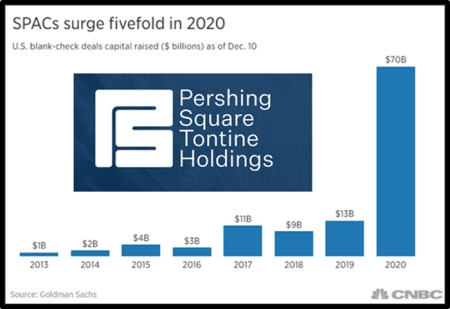 A SPAC – or “Special Purpose Acquisition Company” – is a company with no commercial operations that is formed strictly to raise capital through an initial public offering (IPO) for the purpose of acquiring an existing company.

As you probably suspect from all the news about SPACs lately, these deals are booming again, especially in the U.S.

So far, a total of $70 billion has been raised through these blank-check acquisitions, said Goldman Sachs. This is five times the amount of money that was raised last year.

Once the IPO is successful, the company is given two years to look for a private firm, with which it can merge; hence go public.

When making the announcement on Monday, the New York-based investment bank reported that there has been about 206 SPACs in 2020.

Overall, SPAC deals proceeds have accounted for more than half (52%) of the $124 bilion raised from 356 initial public offerings held this year.

Why is there a surge in SPACs, and will this trend continue in 2021?

According to Jeffrey Mortara, the head of Equity Capital Markets origination at UBS, “SPACs have become a new way of conducting an M&A deal.”

But more than that, they allow companies to gain liquidity.

When a target company merges with a SPAC sponsor, it’s able to access liquidity through the public market.

Moreover, SPAC deals are conducted in a speedy and efficient manner. This is because a SPAC IPO involves less red tape than a regular IPO.

Take the example of Luminar Technologies.

The autonomous vehicle startup announced it would be going public by merging with special-purpose acquisition company, Gores Metropoulos Inc. just three months ago. By December 3, the deal had been finalized, and this saw Luminar raise $590 million from the IPO.

Another factor that could explain why SPAC deals are gaining in popularity is the fact that they offer target companies more access to capital.

This makes them particularly attractive to small and medium-sized firms. Such businesses may be looking to invest in brand awareness or fund their expansion. However, they may not be suitable candidates for regular IPOs.

Fortunately, they can raise the capital they need by merging with a SPAC sponsor.

Dr. Emir Hrnjic explained how the Covid-19 pandemic and U.S. presidential elections had made it even more difficult for businesses to raise capital due to the uncertainty in global markets.

Speaking in an interview, the head of fintech training at the Asian Institute of Digital Finance said, “In this extraordinary year, traditionally-raised capital suffered. SPACs have found the way to inject needed funds into capital-starving companies.”

Here are some of the biggest SPAC IPOs this year:

Is the surge in SPACs likely to carry on to the new year?

According to David Kostin, yes, this trend will continue. Kostin, who serves as Goldman Sachs’ chief U.S equity strategist said, “We expect a high level of SPAC activity will continue into 2021.”

But not everyone agrees with this. Hrnjic believes they could very well take a downward trend.

He cited a couple of reasons for his prediction, such as a decline in investor sentiment, resistance from target companies and the escalation of traditional markets for raising funds.

Hrnjic also suspects that more regulations may be enforced on SPAC IPOs.

In the meantime, SPACS are the flavor-of-the-month.