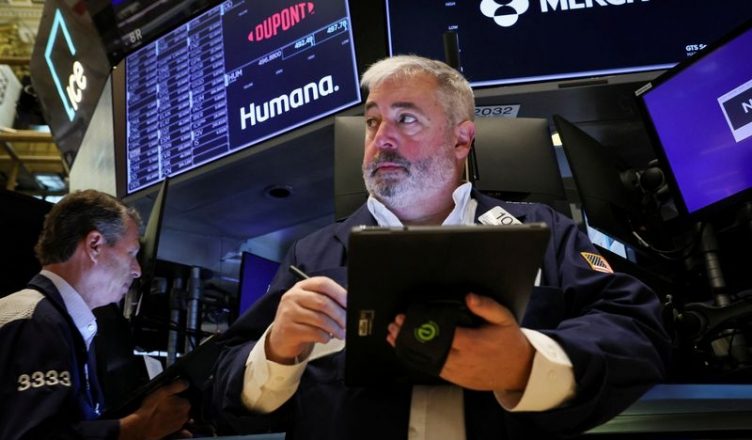 The gains stretched across industries Thursday, with all 11 of the S&P 500’s sectors advancing for the day. Tech stocks were among the best performers, with some recent stock-market losers outperforming the broader market.

Thursday’s stock-market jump builds upon the most volatile year for the S&P 500 since the 2008 financial crisis. The broad stock-market gauge has recorded 122 daily moves of 1% or more, the most in 14 years.

The market pushed higher early Thursday after the Labor Department reported an increase in jobless claims from last week, amid Federal Reserve efforts to cool the economy and in particular the labor market.

First-time filings for unemployment benefits totaled 225,000 for the week ended Dec. 24, according to the report. That was an increase of 9,000 from the previous week and slightly above the 223,000 estimate from Dow Jones.

The market action follows a broad selloff during the regular session Wednesday as recession fears weighed on investor sentiment in a losing month and year. The Dow lost 365.85 points, or 1.1%. The S&P 500 fell 1.2%, while the Nasdaq Composite dropped 1.35% on Wednesday.

Tesla (TSLA:NASDAQ) shares shot up $9.11, or 8.1%, to $121.82. They remain down 65% for the year. Shares of Alphabet (GOOG:NASDAQ) and Meta Platforms (META:NASDAQ), which are headed for one of their worst years on record, also outperformed the broader market, adding at least 2.8% each.

Apple (APPL:NASDAQ) shares rebounded after four consecutive days of losses, rising 2.83%. Netflix (NFLX:NASDAQ) gained 6.3% following a double upgrade to buy from sell by CFRA, saying it will be difficult for competitors to catch up with the streaming giant

One notable loser in the market was Cal-Maine (CALM:NASDAQ) whose shares shed 15% after reporting earnings that fell short of Wall Street’s expectations even as the egg producer reported record sales.

Albeit, major averages are headed toward their worst year since 2008. The Dow has lost 8.58%, while the S&P 500 shed 19.24%. Meanwhile, the Nasdaq is the laggard of the three, down 33.03% as investors dumped growth stocks amid rising interest rates.

For the most part, the long-awaited “Santa Claus Rally” hasn’t yet arrived. U.S. stocks tend to rise during the Santa Claus rally period—the last five trading sessions of the year and first two of the new year.

There is also growing anxiety that rising demand could boost prices for energy and other commodities, propelling central bankers to raise interest rates further to curb inflation. The spread of Covid-19 in the country could also curb production, disrupting supply chains.

Wall Street is also considering what China’s shift away from a zero-tolerance approach to Covid-19 means for markets. On one hand, the resumption of travel in and out of China could add a boost to the global economy as growth slows.

With just one trading session left in 2022, many investors are likely to end the year nursing heavy losses. As of Thursday, the Dow industrials, S&P 500 and Nasdaq Composite were down 8.6%, 19% and 33%, respectively, this year.

In terms of how the next year would look like, Wall Street is bracing up for an economic recession to materialize early in 2023, as evidenced by the three quarters of projected S&P 500 earnings declines and continued defensive sector leanings.