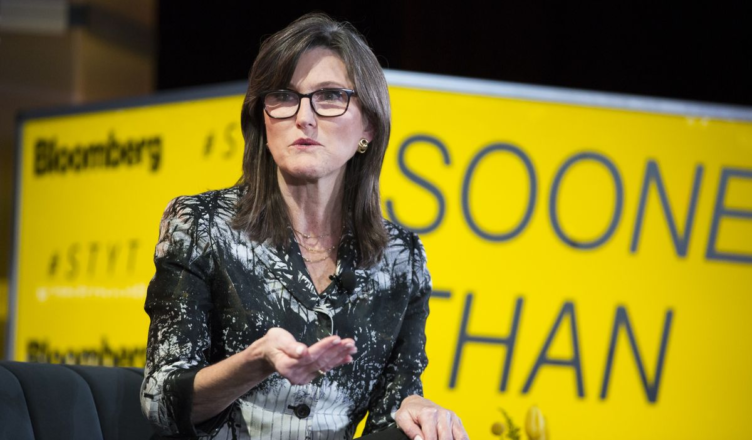 Shares of ARK Innovation ETF (ARKK:NYSE) careened in Tuesday’s sell-off as risk-off continued to gain momentum in the market. Shares of Cathie Wood’s flagship fund slipped by 4.2% as investors rotated away from technology and growth stocks against the backdrop of a sharp rise in Treasury yields.

The 10-year U.S. Treasury note has climbed 24 basis points to 1.54% within the past week following the hawkish tilt from the Federal Reserve at its monetary policy meeting last week which has broadly been interpreted as a vote of confidence on the economy.

Treasury notes are inversely correlated with equities and are widely seen as a hedge against inflation. When there is a rise in production costs and consumer prices as exemplified during inflationary periods, the value of money erodes.

This implies that money is more valuable in the present time than in the future, making assets such as stocks look less attractive to investors whose valuations rely more on future cash flows. To protect their investments, investors seek the safety of bonds, which weigh heavily on growth stocks such as those in the technology sector which have a high future discounted value.

September has not been a good month for ARK Innovation ETF. The fund has dropped 8% within the past month, its biggest decline since May. ARK Innovation ETF has seen $21.4 billion shaved off from its market capitalization since last week.

Cathie Wood’s funds have been a shadow of its 2020 performance when it was the best performing fund in the market. ARK Innovation ETF is trailing the broader market, having dropped by almost 10%, in comparison with the 15.8% gain from the S&P 500. The fund ranks in the lowest percentile year-to-date among 601 mid-cap growth funds tracked by Morningstar.

The high-growth stocks that buoyed ARK Invest have struggled due to the reopening of the economy which has made investors pivot away from stay-at-home stocks into economic sensitive sectors such as financials and energy. Shares of Roku (ROKU:NASDAQ), Square (SQ:NASDAQ), Twilio (TWLO:NYSE), and Zoom (ZM:NASDAQ) fell by and 3.3%, 5.9%, 6.6%, and 4% respectively in Tuesday’s trading session. However, Coinbase (COIN:NASDAQ) and Tesla (TSLA:NASDAQ) had a softer landing after both stocks slipped by 1% and 1.7% respectively. On a year-to-date basis, these stocks are also trailing the broader market.

The performance of ARK Innovation ETF has begun to stir up dust in the investment community about the potency of Cathie Wood’s investment strategy. More investors are taking out short positions against Cathie Wood’s flagship fund as questions continue to mount on the seemingly unsustainable growth expectations being priced into the valuation of the stocks in the fund’s holdings.

Short interest against the fund is about 12%, with over $2.7 billion in bets against ARK ETF according to reports from the Financial Times. Micheal Burry of the big short fame also stated that he was taking a bearish bet against the thematic fund valued at $31 million. This prompted a scathing reaction from Cathie Wood who stated that Burry “does not understand the innovation space”.

Despite what appears to be the circling of vultures, Cathie wood has reiterated her bullish stance on her growth investment strategy. She stated that her bets have a five-year time horizon arguing that the recent drop in stock prices do not have any fundamental bearing on her stock holdings.

She is also putting her money where her mouth is. Apart from trimming her position in Chinese stocks (due to the regulatory crackdown) and Tesla (to fund purchases), Woods has taken advantage of the recent drop to buy up more shares of stocks in her holdings. Wood states that she expects a 25% to 30% compound annual rate of return from her strategies.