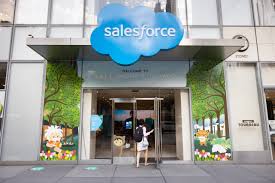 Shares of Salesforce (CRM:NYSE) spiked above 7% on Thursday after the company raised its revenue projection for the current financial year and offered a forecast for the next year that exceeded Wall Street expectations.

The cloud software firm raised its revenue guidance for the fiscal year that ends Jan. 31 to a range between $26.25 billion and $26.35 billion, a jump from its previous estimate of $26.2 billion to $26.3 billion. Salesforce also set stronger guidance for the 2023 fiscal year as it expects growth to continue. The San Francisco-based company expects its revenue to hit between 31.65 billion to $31.80 billion, exceeding Wall Street’s target of $31.1bn.

The rise of automation and artificial intelligence has given Salesforce the firepower to take on bigger players like Oracle (ORCL:NASDAQ) and Microsoft (MSFT:NASDAQ). A slew of deals, including the purchase of workplace messaging app Slack, has significantly boosted the software maker’s revenue over the past year.

The acquisition of Slack is a major catalyst for the increase in revenue and strong forecast. Salesforce recently acquired the chat-based business communication company for $27.7 billion, its biggest acquisition ever.

As more businesses begin to pivot to remote working, the need for cloud services would gain momentum. Even those that choose to return to offices would still need cloud services to carry out daily operations and secure their files. This has given Salesforce a source of sustainable competitive advantage in a highly aggressive and fast-changing sector.

Weaver also informed analysts that the acquisition of Slack would hurt its adjusted operating margin. However, the company expects a 20% rebound for the 2023 fiscal year which is higher than the 19.2% set by analysts. the company believes that its strong revenue performance would allow it to expand its operating margin.

Salesforce is also benefiting from the spread of the delta variant. Last month, Salesforce Chief Operating Officer Bret Taylor, in an interview revealed that the company has seen an increment in the adoption of cloud-based tools due to the spike in infection rates.

The company is also not resting on its oars, as it intends to leverage success to fuel expansion into new software markets. The acquisition of Slack is the company’s second in two years. In 2019, Salesforce acquired data visualization business, Tableau Software Inc., for $15.7bn. Strategists believe that the company intends to use acquisitions to expand its market share, but the company has downplayed appetite for large strategic acquisitions in the near future.

Salesforce has had a blistering 2021 with its shares rallying by 24.8% year-to-date. The cloud-based software was initially perceived to be a pandemic stock, due to the global lockdown which made companies go online to continue operations. The push towards direct-to-customer business models would give salesforce enough tailwinds to be a disruptive force in enterprise software.

The huge runway for growth has prompted a slurry of analysts to upgrade their price targets of the stocks. Analysts at Morgan Stanley (MS:NYSE) gave a baseline target of $305, which could go as high as $390 in a bullish scenario.

A sponsored report by IDP Salesforce and its ecosystem was responsible for the creation of over 9 million jobs and generating revenue of about $1.6 trillion. This has made the company have one of the best secularly positioned names in the enterprise software business. The huge runway for growth has prompted a slurry of analysts to upgrade their price targets of the stocks.