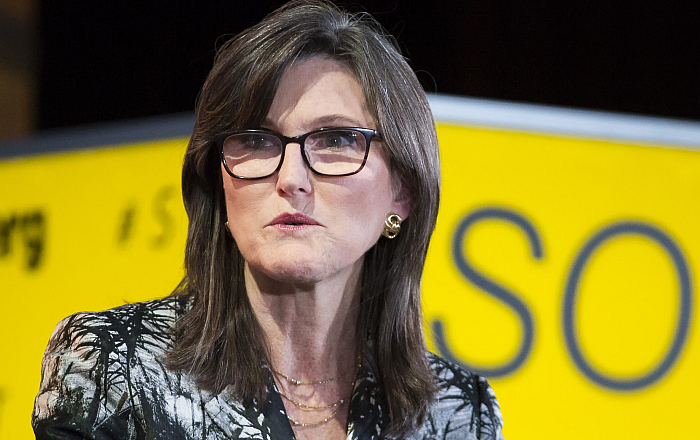 It was certainly a “November to remember” for ARK Innovation Fund (ARKK:NASDAQ), as the thematic ETF continued its downward slide, deeper into negative territory for the year. Shares of Cathie Woods flagship fund finished Tuesday’s trading session 1.15% lower than its opening price.

The fund lost 13% of its market value in November, its worst performance for the year. ARK Innovation ETF is down by a massive 24% this year, underperforming the broader market by 40% (the S&P 500 has rallied by 24.65%). This underperformance places ARK Innovation among the worst-performing mid-cap growth funds for the year to date, according to Morningstar. It remains among the top-performing funds over the last 5 years.

This is a contrast to the high flying performance of the fund last year. ARK founder Cathie Wood made a huge splash by picking stocks that soared during the thick of the pandemic. The $18.6 billion ARK Innovation fund, outperformed all other US-based equity funds last year due to its outsized holdings of stocks that rallied during the economic lockdowns.

However, as the economy reopened, bolstered by mass vaccinations, the stocks in the holdings are struggling to find their feet. The biggest constituents of the fund are still negative for the year despite the broader market’s impressive run.

ARK Innovation ETF was also scathed by the sell-off in Chinese equities due to the regulatory crackdown by Beijing. ARKK had to liquidate its Chinese holdings such as JD.com (JD:NYSE) and Baidu Inc. (BIDU:NASDAQ) after it deemed Chinese stocks too risky to hold, but this came after severe downturns for Chinese equities.

The budding economic forecast does not also look amiable to stocks in ARK’s holdings. Fed Chair Jerome Powell at a Senate hearing on Tuesday took a more hawkish tone on rising consumer and production costs by stating that inflation is no longer transitory.

The Fed Chair stated that the central bank would be raising interest rates earlier than expected due to the stickiness of the inflation. The central bank hopes to wrap up its bond-buying program by January 2022. The environment for expensive growth stocks could get worse in the coming years.

With such a macroeconomic climate in view, it appears that the stocks in ARK holdings would be further off-pace from the broader market for a long time. This gloomy forecast has not dampened the optimism surrounding the holdings. Rather, Cathie Wood has been doubling down on stocks and increasing her position on some of the fund’s holdings as the fund is taking advantage of the dip in share prices.

Cathie Wood also reiterated that her funds should quadruple over the next five years, which, essentially, equates to a belief that multiples on already expensive stocks will expand further – since many of the core holdings will not see business growth of 300% in just five years

However, not all investors share Woods’ optimism on her funds. The price decline has been a test of patience for investors who own shares of ARKK. further downward movement could see a lot of investors heading for the door in the months ahead, especially with the Fed’s interest rate hike now in sight. Albeit, those still aboard the ARK may have to don their life jackets.