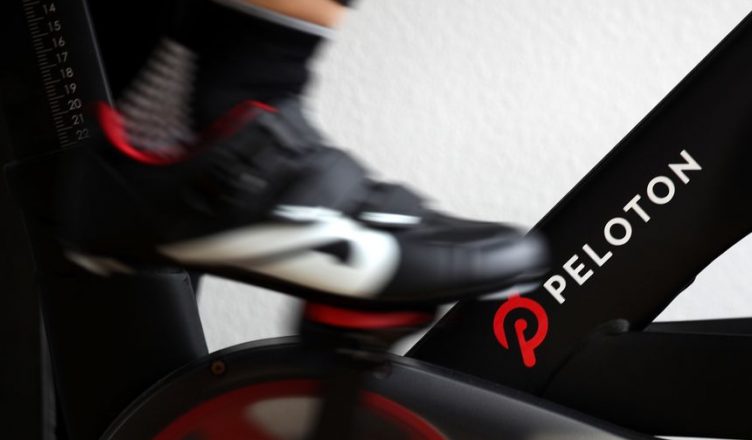 Shares of Peloton Interactive (PTON:NASDAQ) shot up by 25% on Tuesday following reports that John Foley would step down as chief executive of the fitness-equipment maker. Peloton co-founder, Foley, would become executive chairman. Barry McCarthy, a former executive at Spotify (SPOT:NASDAQ) and Netflix (NFLX:NASDAQ) chief financial officer, will become president and CEO.

On top of announcing Foley will be stepping down, Peloton on Tuesday slashed its full-year financial outlook, saying it now saw fiscal 2022 revenue within a range of $3.7 billion to $3.8 billion, down from a prior range of $4.4 billion to $4.8 billion. The company stated it expected to end the year with about 3 million connected fitness subscribers vs. previous estimates of 3.35 million to 3.45 million.

The management shake-up in Peloton may be a response to a scathing letter from an activist investor Blackwells Capital earlier in the week which recommended that Foley be fired while the company be put up for sale following a series of setbacks which ranged from production delays to product recalls.

Blackwells Capital also accused Foley of mismanagement, including misleading investors and hiring his wife in an executive role, a decision that the hedge fund claimed cost $40bn in shareholders’ wealth.

However, despite the obvious financial mess, several suitors are reportedly courting the company with the hopes of acquiring it. Amazon (AMZN:NASDAQ) and Nike (NKE:NYSE) are reportedly interested in buying the troubled fitness equipment maker. Amazon has been speaking to advisers about a potential deal, but there is no guarantee the e-commerce giant will follow through with an offer.

Nike is also reportedly interested in acquiring the company. The connected health fitness theme aptly suits what Nike represents, and many investors believe it is the perfect suitor for the once-loved bike maker. Nike had considered a bid for Peloton before the company went public in 2019 but decided not to proceed with an offer, said two people briefed about the matter. If Nike were to buy Peloton it would reverse a decision to focus on tech software rather than hardware.

Both Amazon and Nike have not held any talks with Peloton and the considerations are preliminary, according to people briefed on the matter. Other suitors such as Apple (APPL:NASDAQ) and Disney (DIS:NYSE) are also reportedly lurking in the shadows as they consider placing a bid for the company. Wall Street analysts believe shareholder pressure will build enough for Peloton to solicit bids from potential buyers

The growing number of suitors for Peloton is purely opportunistic given its market value collapsed from nearly $50bn 12 months ago to less than $8bn this week. Peloton stock has fallen 80% within the last year. Earlier in the week, the stock traded below its 2020 IPO price, and it looks like there is no bottoming out for the stock.

The acquisition comes as a breath of fresh air for Peloton whose management has been struggling to keep the company’s head above water. The company has been bedeviled with supply chain issues and dwindling demands due to the reopening of outdoor gyms. Peloton has also taken a brush from regulators following the death of people using its facility. This incident forced Peloton to recall its treadmills after a death incident involving a child.

The company has also been battling to lower operating costs. The company also announced a series of steps it is taking to position the business for long-term growth while establishing a clear path to consistent profitability and sustainable free cash flow. Peloton aims to reduce its planned capital expenditures in 2022 by approximately $150 million and save at least $800 million of annual run-rate cost savings through operating expense efficiencies.

The restructuring program would also see thousands of workers laid off. Foley told Peloton employees last month that the company was considering cutting its workforce and production output due to a drop in demand for high-end stationary bikes and treadmills.