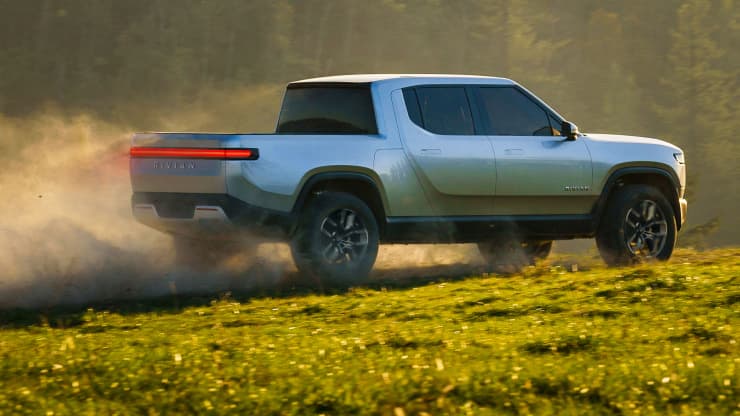 Shares of Rivian Automotive Inc. (RIVN:NASDAQ) continued to climb on Thursday, up more than 20%, one day after its blockbuster IPO. The electric vehicle start-up company finished at $122.99, hitting a valuation mark that instantly made it a rival of traditional carmakers and the latest beneficiary of investors’ fervor for greener auto technologies.

Rivian’s public listing raised more money than any other listing on U.S. exchanges since 2014. This further illustrates the excitement that has been building on Wall Street for electric-vehicle makers, particularly those like Rivian that are still young and relatively unknown but hold promise in challenging the more-established car companies.

Based on its current market valuation, Rivian has surpassed legacy automakers like Ford (F:NYSE) and General Motors (GM:NYSE) by market cap, reaching a valuation of more than $101 billion. However, it is still miles behind Tesla’s (TSLA:NASDAQ) $1 trillion market cap. GM currently has a market cap of about $88.8 billion, while Ford is valued at $78.9 billion.

The IPO also means that earlier investors are cashing out to the bank. Amazon’s (AMZN:NASDAQ) 20% stake in the business is now worth about $20 billion. Amazon plans to use Rivian vehicles in its delivery fleet, having ordered 100,000 to be delivered by 2030. It expects to have 10,000 Rivian vehicles delivering Amazon packages as early as next year.

Ford, another early investor in the start-up owns about 12% of the company through investments that started in 2019 as well as convertible notes, according to public filings by Rivian. Based on Rivian’s closing price of $100.73 a share Wednesday following its Nasdaq debut, Ford’s roughly 102 million shares of the company are worth about $10.3 billion.

Rivian may have beat competitors but there are still questions on its valuation. The company’s debut in many ways defies typical market fundamentals. Rivian is still scraping for revenue and losing tons of money. Rivian lost $2 billion from the start of 2020 through June of this year. The startup says it expects to make up to $1 million in revenue for the third quarter and lose up to $1.28 billion.

The first set of vehicles began leaving the factory ramp in September, as the company hopes to deliver around 1,000 vehicles by the end of the year. It also plans to launch additional models, an all-electric SUV called the R1S and a delivery truck developed in conjunction with Amazon.

It appears that the electric vehicle startup does not have an established business model. Given the frenzy surrounding the company, it is easy for investors to get sucked into the story. Auto companies have to deliver quarterly on a fundamentally low-margin business that requires a lot of operational excellence. Sometimes production may stall due to hiccups in the supply chain or other issues. As such, there are many unanswered questions about the latest entrant into the EV space. Tesla, the most dominant force in the EV space just began making profits earlier this year since going public about a decade ago.

Albeit, broader macroeconomic factors which favor the EV space may give the stock a boost. The market for electric vehicles is relatively small but growing quickly. Electric-vehicle sales accounted for 3.6% of total U.S. auto sales in October, according to analysts at Morgan Stanley.

The Biden administration aims to hasten the transition to electric vehicles as part of its efforts to reduce the country’s greenhouse-gas emissions. To do so, it is pushing to expand purchase incentives for electric-car buyers. Today, buyers of the first 200,000 Rivian vehicles are eligible for a $7,500 federal tax credit that can help defray the upfront costs of purchasing a battery-powered model.

Given these conditions, Rivian has a lot of runway to go. The stock no doubt has impressed Wall Street and there are more institutional investors lining up to get a piece of the action. However, with legacy automakers such as Ford, GM and Volkswagen (VWKS:OTCMKTS) accelerating the shift towards Electric vehicles, the management of Rivian cannot afford to take their foot off the pedal.