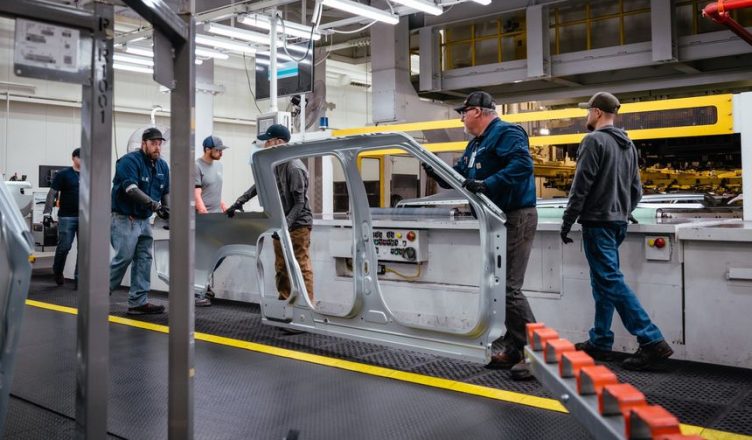 Shares of Rivian Automotive (RIVN:NASDAQ) popped almost 11% after the Electric-vehicle startup and German automaker Mercedes-Benz released a joint statement about a memorandum of understanding (MoU) to make large electric vans for each of its brands

The start-up, which has struggled with production in the US, will share costs on a factory with the German carmaker’s van unit. Both companies intend to open a new factory in Central/Eastern Europe, where Mercedes-Benz has an existing site.

This marks the first international expansion for Rivian, which builds vans, pick-up trucks and sport utility vehicles in Illinois. The joint venture would start production “in a few years,” according to the statement, but the facility is not likely to begin production until after 2025. Neither company detailed costs of the project.

The factory will carry two lines, one for each company, with plans for savings through joint purchasing and other synergies. The companies will also have one paint shop and assembly line within the factory, and are working to establish what other parts of the process can be combined to save costs.

Full details about the site, which may be at the current Mercedes facility in Hungary, as well as the timings are expected “very soon,” said Mercedes-Benz Van chief executive Mathias Geisen. The project “can move quicker if we do it together”, Geisen said.

The new Rivian van will be based on the current model, which is currently being produced for Amazon in the US, and will be sold in Europe. Mercedes will produce a new battery electric van at the plant as well.

Mercedes already makes commercial vans. The plan is for the two companies to produce two large electric vans: one based on the electric-only platform of Mercedes‑Benz Vans and the other based on the second-generation electric-van Rivian Light Van (RLV) platform.

Mercedes-Benz Vans plans to release only electric models after 2025, and has been seeking a partner to help it spread the costs of setting up production of battery vehicles. The Mercedes CEO stated that the deal with Rivian could lead to other partnerships in the future.

Rivian makes commercial vans for Amazon (AMZN:NASDAQ). The online retail giant rolled out its first Rivian-made electric vans on July 21. Amazon, which has an 18% stake in Rivian, has ordered 100,000 of its electric vans. The partnership with Mercedes would offer Rivian an opprotunty to gain foothold in the world’s second largest automobile market.

“Together we will produce truly remarkable electric vans which will not only benefit our customers but the planet,” said Rivian founder and chief executive RJ Scaringe. “We are sharing investment and technology because we also share the same strategic ambition: accelerating the electrification of the van market with sustainable and superior products,” the EV startup CEO added.

Rivian plans to build a separate factory in Europe or the UK to manufacture its passenger vehicles, though has yet to make a final decision. Talks with the UK government, which previously offered the company a site near Bristol, are continuing.

Though this may come as cheering news for the Amazon-backed startup, there may be reasons to be cautiously optimistic about the deal’s impact on Rivian’s business in the long term. The MoU does little to change the company’s near-term prospects and cash burn rates, which are of greater concern to investors, particularly with a handful of upstart EV companies having either recently declared bankruptcy or warning of liquidity issues.

Rivian’s Q2 sales were around $364 million. But it reported an adjusted net loss of $1.62 per share. It had about $15.46 billion in cash and cash equivalents, about $1.5 billion less than at the close Q1. The company in March halved production estimates for this year because of supply chain problems. Rivian Stock is still down by about two-thirds this year.