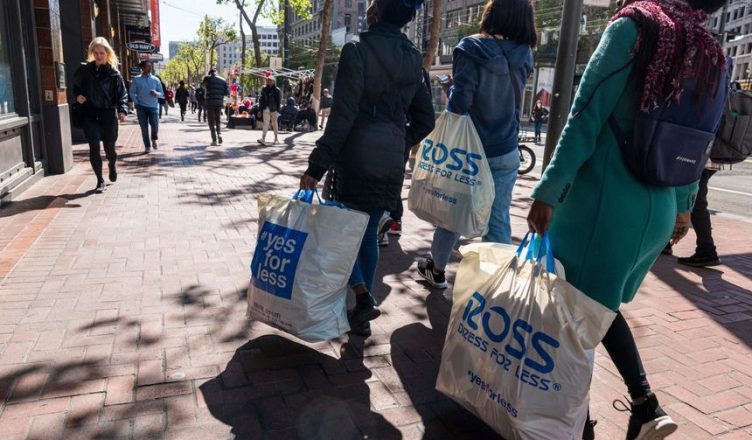 Ross Stores Inc. (ROST:NASDAQ) shares fell 17% to $76.86 in after-hours trading Thursday after the company reported a decline in sales in the first quarter and cut its outlook for profit and sales for the second quarter.

Sales declined to $4.33 billion from $4.52 billion, falling short of $4.53 billion expected. Ross Stores said comparable-store sales declined 7% in the first quarter of 2022. The company’s first-quarter operating margin declined to 10.8%, from 14.2% a year earlier.

Ross is now forecasting same-store sales for the 13 weeks ending July 30 to decrease 4% to 6%. Earnings per share are expected to be between 99 cents and $1.07, compared with $1.39 in the second quarter last year.

Chief Executive Barbara Rentler said the company is adopting a more conservative outlook for the rest of the year because of the first-quarter results and the uncertain macroeconomic and geopolitical environment. Ross CEO said sales underperformed over the balance of the quarter after a stronger start early on.

Rentler stated that the Russia-Ukraine conflict has exacerbated inflation, while the lapping of stimulus payments a year earlier also hurt performance. Growing uncertainty around economic conditions and geopolitics made “prudent to adopt a more conservative outlook for the balance of the year”, the CEO said.

The performance of Ross stores yet again reiterates the broader story in the retail sector and how quickly the panorama is shifting. The moves in rapid succession suggest that the consumption boom of the pandemic period is quickly losing steam. Accelerating inflation is eating into consumers’ purchasing power and eroding companies’ profits.

Walmart (WMT:NYSE), Kohl’s (KSS:NYSE), and Target (TGT:NYSE) all missed estimates and lowered their forecast. Amazon (AMZN:NASDAQ) declared its first quarterly loss ever. The shabby quarterly performance of retail companies is seen as a bellwether for a slowing economy which many believe is heading into a recession even as the Federal Reserve has scheduled more rate hikes.

Yet amidst the rising production and supply costs, discount retail stores have been reluctant to pass on costs to consumers, which is further eating into their balance sheets. As a discount retailer, Ross sought to maintain a discount versus traditional retailers. As a result, the company “strategically increased prices” but didn’t lift them across the board. However, despite this approach, this

However though the outlook for the retail sector looks gloomy, not all stores appear to be feeling the burnt of inflation – at least for now. While consumers may be picky with their spending, it depends on what they are choosing not to spend their money on.

Consumers are shifting away from big ticket items like appliances and TVs and from higher margin apparel sales, and towards basics such as food and “experience” spending like restaurant gift cards, with sales of toys growing as children’s’ birthday parties grow again post-pandemic.

This trend was exemplified with the quarterly performance of retailers like Deckers Outdoors (DECK:NYSE) which rallied more than 12% after the company posted a profit of $2.51 per share on revenue of $736 million.

Foot Locker (FL:NYSE) also reported first-quarter profit that beat expectations. The athletic retailer posted net income of $133 million, or $1.37 per share, down from $202 million, or $1.93 per share, last year.

As such, while the inflation may be biting, and making people spend less, retailers whose business model is built around consumer staples, rather than discretionary products, would weather the economic storm much better.