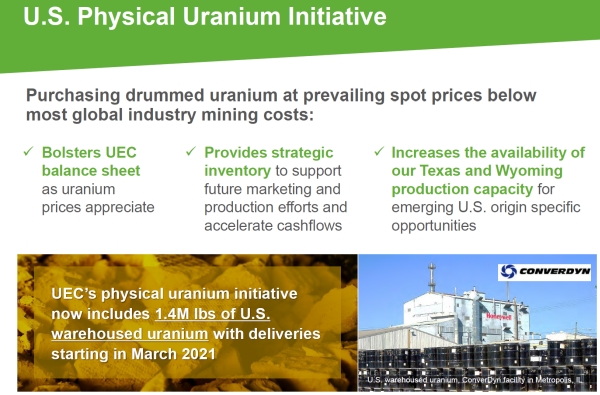 On March 26, 2021, Uranium Energy Corp (UEC.NYSE) reported that its Executive Vice President, Scott Melbye, and current President of the Uranium Producers of America, had presented testimony at the Full Committee Hearing on Nuclear Energy for the Senate Committee on Energy & Natural Resources.

In South Texas, the Company’s hub-and-spoke operations are anchored by the fully-licensed Hobson Processing Facility which is central to Palangana, Burke Hollow, Goliad, and other ISR pipeline projects.

In Wyoming, UEC controls the Reno Creek project, which is the largest permitted, pre-construction ISR uranium project in the U.S.

Additionally, the Company’s diversified holdings provide exposure to a unique portfolio of uranium related assets, including:

In Paraguay, the Company owns one of the largest and highest-grade ferro-titanium deposits in the world.

The Company’s operations are managed by professionals with a recognized profile for excellence in their industry, a profile based on many decades of hands-on experience in the key facets of uranium exploration, development, and mining.

In his presentation, Melbye drew our attention to the wide application of nuclear power around the country. For instance, it’s the source of carbon-free power to more than half of the nation’s population.

An added bonus is that nuclear energy works seamlessly alongside other green technologies, like wind and solar.

Nonetheless, he also unearthed some of the biggest challenges that are facing the nuclear energy sector. Specifically:

In his speech, Melbye also shed light on the significant role that uranium- the most widely used fuel in nuclear plants- plays in naval propulsion and nuclear deterrence.

He cited an example of the 93 small modular reactors in the fleet of 82 aircraft carriers and submarines, which have been used to defend the country since the 1950s.

“These reactors must rely on U.S. origin uranium which is unobligated to the controls of foreign nations and we need to retain our ability to independently refuel them,” Melbye stated.

He revealed his concerns about the way countries like Russia and China use their energy dominance to their geopolitical advantage. “They use their nuclear energy clout to strengthen geo-political ties with energy-starved countries around the world,” he added.

That said, he is hopeful that things will take a turn for the better. He cited factors such as:

The entire testimony, which was presented on March 25, 2021, also captured the need for the Department of Energy to move swiftly in exploiting the licensed infrastructure and human resources that the country has currently.