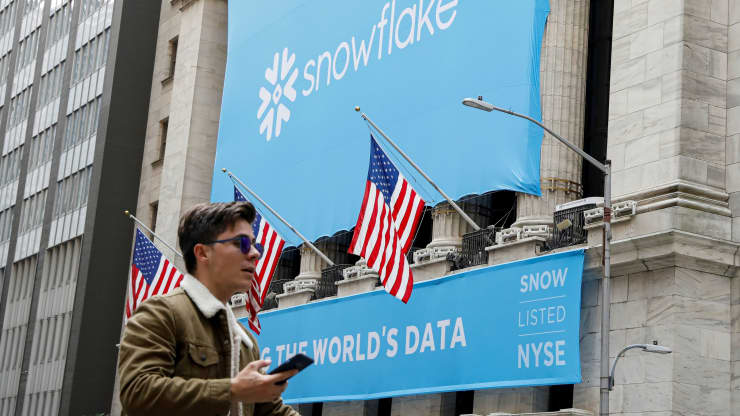 Shares of Snowflake (SNOW:NYSE) closed up 23% Thursday, a day after the company released second-quarter results that crushed on the top line estimates. This marked the company’s biggest one-day rise since its first day of public trading on Sept. 16, 2020, after it debuted with one of the biggest U.S. initial public offerings for a software company.

The cloud data platform provider reported $497 million in revenue for the quarter, more than the $467 million expected by analysts, according to Refinitiv. The largest chunk of Snowflake’s sales, product revenue, grew 83% year over year to $466.3 million, while its revenue retention rate came in at 171%

On an adjusted basis, analysts estimated Snowflake would report a loss of 1 cent per share. But the company does not break out adjusted earnings in its releases. Snowflake added that it now has 246 customers with “trailing 12-month product revenue greater than $1 million,” up from 206 from the previous quarter. Snowflake’s total customer base now stands at 6800,

Snowflake sells data analytics and management tools that run on cloud-computing platforms such as Amazon Web Services, part of Amazon.com (AMZN). Snowflake charges customers based on how much they use the company’s data storage and analytics products rather than charging a flat-rate subscription.

While this consumption-based model can be affected by economic conditions, the company’s success was driven by continued traction upmarket, strong execution, ongoing data warehouse migration to the cloud, and the addition of more products and use cases. Most software companies sell their wares either on a perpetual-license basis or a recurring subscription model, but snowflake’s data-crunching capacity from is more like paying for water.

Chief Executive Officer Frank Slootman said during a conference call that the consumption model is an advantage in tough economic times because customers know they can slow down spending if needed.

Since reaching a record of $401.89 in November, the stock had tumbled 60% through Wednesday’s close, as growth slowed and valuations across the industry were battered by a weaker economic outlook.

Software giant Salesforce (CRM:NYSE), which reported results on Wednesday, gave a revenue forecast that missed estimates, saying customers are slowing their purchasing amid concerns about the economy. However, Snowflake’s sales growth remained strong, demonstrating durable secular growth despite challenging macroeconomic conditions. The results are a likely sign there’s been no pullback in new customer additions and use by existing clients.

Snowflake stock had been the source of some controversy on Wall Street headed into the company’s earnings report late Wednesday, but the latest results gave bulls the ammunition they craved. The software company’s strong results and boost to guidance has given investors renewed confidence in the outlook for cloud computing. Following its impressive earnings report, a flood of analysts are giving positive ratings on the stocks. Analysts from Goldman Sachs (GS:NYSE), Barclays (BCS:NYSE), Oppenheimer (OPY:NYSE) and Rosenblatt, maintained their buy recommendations, with many of them lifting their price targets as the stock ‘bucks the bear market narrative’ peddled by industry peers who blamed slowing demand for weaker sales and poor guidance.