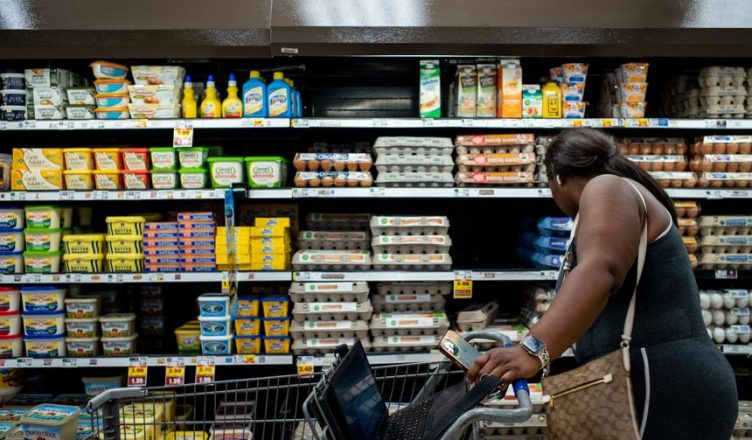 Ford shares posted their biggest proportional loss since 2011, dropping $1.84, or 12%, to $13.09, a day after the auto maker warned that parts shortages and higher costs will hit earnings. Gap fell 31 cents, or 3.3%, to finish at $9.21. The Wall Street Journal reported that the apparel retailer will trim about 500 corporate jobs to cut costs.

Casino operators were among the small group of S&P stocks that notched gains on the prospect that loosening Covid-19 restrictions could improve tourism in Macau, an Asian gambling mecca. Wynn Resorts rose $1.91, or 2.9%, to $67.80 and Las Vegas Sands gained 46 cents, or 1.2%, to $39.28.

All eyes are on the Fed, which began a two-day policy meeting. At the end of the gathering Wednesday, the central bank is expected to raise its interest-rate target by three-quarters of a percentage point to a range of 3% to 3.25%. Traders in fed-fund futures put a roughly 1-in-6 chance on a full-percentage-point increase.

The August CPI figures showed that inflation was much stickier than earlier thought. The common assumption was that high consumer prices was been driven by high oil prices. However, with the price of oil and gas sliding in past the last 6 weeks, the true nature of inflation is beginning to unravel.

US consumer prices overall rose more slowly in August from a year earlier, but increased sharply from the prior month after excluding volatile food and energy prices, showing that inflation pressures remained strong. With core inflation still on the rise, there is the possibility that the Fed could raise interest rate by a 100 basis points (1%).

Recent downbeat corporate updates from big businesses such as FedEx and Ford Motor have also added to the gloomy economic outlook. Fed officials have made clear they are willing to accept a recession if it is the price of slowing the pace of inflation.

The tone has definitely gotten a bit more pessimistic for stocks as more investors are shifting funds to bonds as yields rise. Higher rates have pummelled markets so far in 2022, putting stock and bond prices into reverse after a multiyear run-up driven in part by low interest rates.

The surge in Treasury yields is also being echoed in foreign-government bonds as other major central banks step up their own efforts to control rising prices. The Bank of England is expected to raise rates Thursday, following a similar move by the European Central Bank in early September.

As central banks around the world increase interest rates, amidst disruptions from Chinese Covid-19 lockdowns and the war in Ukraine, there is growing anxiety that the global economy would go into a recession next year. Already American multinationals are seeing a strong dollar eat into their earnings. A global recession would further slow revenues and put pressure on the stock markets, as investors would seek safety over risk.